Golden Delicious is a large, yellowish-green skinned cultivar and very sweet to the taste. It is prone to bruising and shriveling, so it needs careful handling and storage. It is a favorite for salads, apple sauce, and apple butter.

Royal Gala/Gala apples are small and are usually red with a portion being greenish or yellow-green, vertically striped. Gala apples are fairly resistant to bruising and are sweet, grainy, with a mild flavor and a thinner skin than most apples. Quality indices include softness, sweetness, and lack of meal worms. Gala apples are sweet and aromatic, with a size that fits nicely into a child’s hands. It can be added in salads, or cooked, and is especially suitable for creating sauce.

The Fuji apple is an apple hybrid developed by growers at the Tohoku Research Station in Fujisaki, Aomori, Japan, in the late 1930s, and brought to market in 1962.

Once upon a time… there was the plum

Growing wild in America and Asia, plum trees were first grown by the Etruscans (in what is now Tuscany). The Romans and Egyptians liked this small, tasty fruit, which they also dried. In the 12th century, Crusaders returning from an unsuccessful expedition to Damascus brought back some plum tree plants, which attracted the gibe: “all that way just for some plums!” Hence the well-known French expression…

Plums were very popular during the Renaissance. Reine-Claude greengages were named as a tribute to the wife of François I, Claude de France, the daughter of Anne of Brittany, who loved them. Today there are around 2,000 varieties worldwide. France is the world’s 4th biggest producer. The market is concentrated around ten varieties that are usually classified by colour: green, yellow, blue or red.

A late variety, it appears around mid-September.

A recent variety, rounded but slightly flattened in shape, it has an attractive reddish-purple ruby-like colour!

Its flesh, also red-coloured, is not too juicy, very firm and sweet.

Once upon a time… there was the kiwi

The kiwi, also known as the “Chinese gooseberry”, is the fruit of the Actinidia, a sturdy, prolific vine that originated in China.

Discovered in the Yang Tsé Kiang valley, this fruit was considered to be life-giving and was originally called “Yang Tao” (Yang peach) or “Mihou Tao” (Monkey peach).

It was not until 1960 that the New-Zealanders called it “kiwi” from the Maori word for their country’s iconic bird. 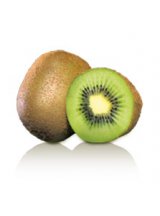 100% of the green kiwifruit

is of the Hayward variety.

in the south-west, they have

due to an exceptional ‘terroir’